This is Scientific American's 60-second Science. I'm Jason Goldman.
Brown-headed cowbirds are obligate brood parasites. That means they lay their eggs in the nests of other birds, leaving all the hard work of incubating the eggs and feeding the chicks to somebody else. Luckily, many of those other species have evolved some antiparasitic defenses. Yellow warblers, for example, produce a certain type of call to warn other warblers about nearby cowbirds. Researchers call it a "seet" call.
"We were working on the yellow warbler. And whenever we were doing seet call playbacks to the yellow warblers, the red-winged blackbirds kept showing up. That was truly a discovery, this aha moment that allowed us to explore this question even further."
Ecologist Mark Hauber from the University of Illinois at Urbana-Champaign, who ran the study.
The yellow warblers' seet call is called a "referential alarm call," because it is only produced for a single threat: the brown-headed cowbird.
"And in response to the seet call, the female yellow warbler, instead of attacking or mobbing the cowbird, she sneaks back to her nest and sits on it tightly so as to prevent the cowbird from being able to lay a parasitic egg."
Red-winged blackbirds, which sometimes nest near warblers, do not produce referential alarm calls. But it turns out that they can eavesdrop on the yellow warblers' calls. And they respond to the seet calls the same way they do to the sounds of cowbirds themselves. The results were published in the journal Communications Biology. 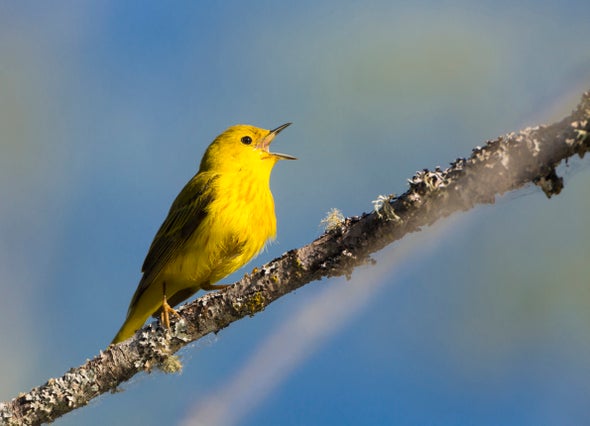 So red-winged blackbirds prefer to nest near yellow warblers, since the warblers provide additional vigilance against brown-headed cowbirds. But it's probably a two-way street.
"From the literature, we know that yellow warblers do better when they nest near red-winged blackbird territories. And that makes sense because the redwings are really aggressive. If you walk in a reed bed full of redwings, you actually get physically attacked by the redwings. They are not intimidated by large predators. So for the yellow warblers, it makes sense for them to nest near the redwings."
The researchers say that this is the first known evidence of animals eavesdropping on antiparasitic referential alarm calls.
"These birds, yellow warblers and red-winged blackbirds, they speak different languages. They understand their own communication signals and systems. And what we discovered here is, basically, a bilingual red-winged blackbird that can understand the vocalization systems and the communication systems of another species."
Young birds learn their vocalizations much like young humans learn languages. In future research, Hauber hopes to understand whether the birds rely on the same underlying neurobiology to understand the calls of other species as they do when they hear the sounds of their own species—and what that might mean for our own efforts to learn additional languages.
Thanks for listening for Scientific American's 60-second Science. I'm Jason Goldman.