With all the talk these days about "leaping years,"

we should probably be asking "what is a year, anyway?"

a year is basically the period of time that it takes for one physical body to orbit another.

So an earth month could equally be called a "moon year."

But to under-simplify things, even if we stay on earth, there are several different ways to define a year 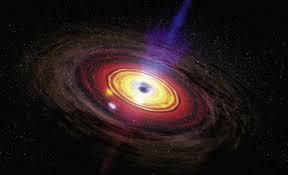 — or, since the earth follows an elliptical orbit which precesses,

this is called the anomalistic year.

Of course, all three "years" have slightly different lengths.

But our day-to-day civil calendar does its best to follow the tropical year,

since its duration is defined by the tilt of the earth's axis which also determines the passage of the seasons.

There are non-earth years, too:

and the "Galactic" year

is around a quarter of a billion earth years!

But not all galactic years are long:

check out this timelapse of stars orbiting the supermassive black hole at the center of the Milky Way!

Even though you can't see the black hole, it's pretty obvious that it's there,

what with all those stars zipping around in orbits taking only ten earth years!

Astrophysicists have even used these orbits

to figure out that the black hole is as massive as 4 million suns.

But enough about interstellar timekeeping…

if you want to learn more about leap years here on Earth,

check out Grey's new video over on his awesome channel, "cgpgrey"

And a big thanks to the UCLA Galactic Center for doing sweet supermassive black hole research with the Keck telescope in Hawai'i,

and for sharing their images with the public.